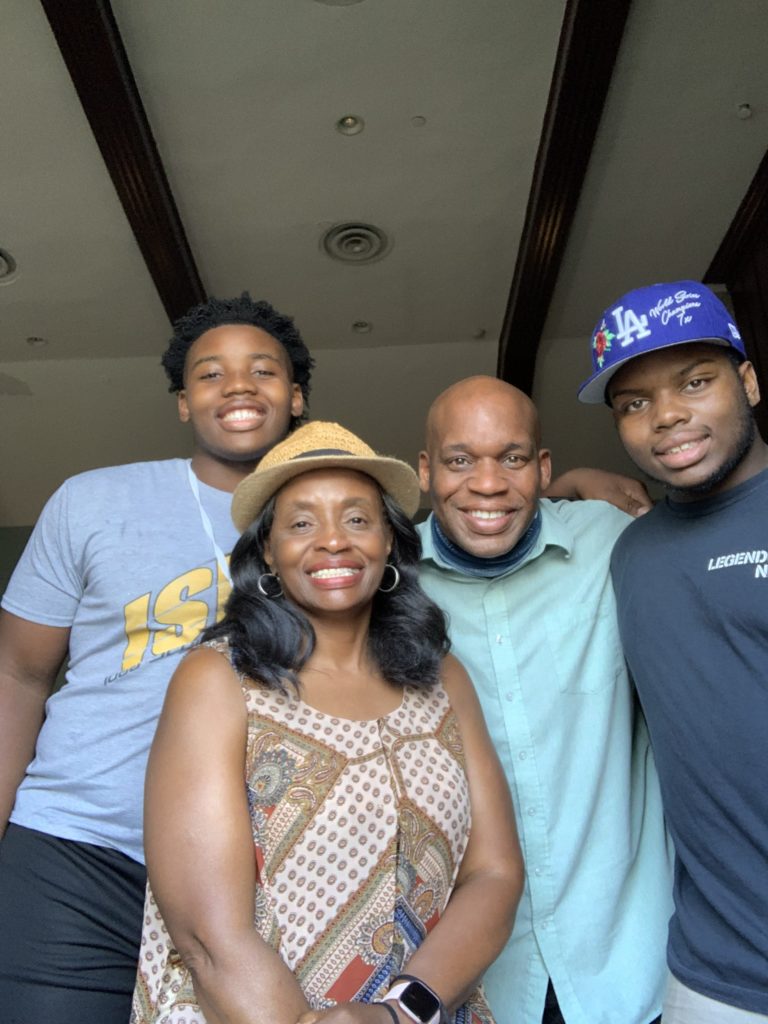 Navigating the college admission process is challenging for many high school students and their families who want the best for them. The process requires significant knowledge and nuance, a privilege and resource many families do not have. This is why Let’s Get Ready is committed to making the process accessible to students and the caregivers who are supporting them as they pursue their college dreams.

Kecia Palmer-Cousins is the mother of two Let’s Get Ready students, Kendall and Kyle. As a first-generation college student, she experienced her own hardship navigating the path to and through college. However, Kecia’s determination enabled her to find resources and a community to guide her throughout. Now as a parent, Kecia has had to navigate a new set of complex processes to support her children. She learned about Let’s Get Ready through The Boys & Girls Club of Mt. Vernon, the same center that she attended in her youth. And since signing her sons up for Let’s Get Ready, Kecia has become an advocate for the organization, spreading the word with parents in her community who need support.

A consistent theme throughout Kecia’s story is the importance of community for young people of color pursuing a college education. “It takes a village” to support young people historically underrepresented in higher education settings. Let’s Get Ready offers that village to every student through a community of near-peer coaches who are invested in their wellbeing and academic success.

Kecia was born in Manhattan in the 1960s, the child of hard working parents, a sanitation worker and nursing aide who stressed the importance of education. Her parents were not able to pursue college; however, when they moved Kecia and her three brothers from the Hunts Point section of the Bronx to Mt. Vernon, they enrolled Kecia in enrichment programs to cultivate her curiosity and passion for building things, sparking her dream to become an engineer. Kecia was able to access a community of people and resources that guided her. While her parents had limited access to opportunities for her, they signed every document to demonstrate their support and belief that she would succeed. Kecia was admitted to several institutions and secured a game changing scholarship to attend Boston University. She was able to achieve her professional goals as an engineer and entrepreneur. She was fortunate to have a 24-year career at Verizon and earn an MBA in Marketing from Long Island University and a Masters Certificate in Project Management from George Washington University – all paid for by her employer.

Kecia and her husband Kevin, a Northwestern University civil engineering graduate, wanted to ensure that going to college was accessible for their sons, Kendall and Kyle. Even though they would not be first-generation students, they knew that as young men of color they would face numerous obstacles on their college journeys. They connected them with resources and mentorship, but they also recognized they might need additional support from a community that supported young people who had shared experiences with their children. When Kecia learned about Let’s Get Ready at The Boys & Girls Club, she said it was the best flyer that she ever read. The program helped her boys feel confident taking the SAT, since they experienced some test anxiety. With the support of their coach, they felt more comfortable confronting the test. The tech-based mentoring program helped Kendall stay on track when he applied to schools, including Morehouse, Georgia Tech, and Cooper Union. The encouragement that Kendall received from his Let’s Get Ready coach helped him apply to selective schools – which is especially important since young men of color are oftentimes undermatched when looking at colleges. Kendall was admitted to a number of institutions and matriculated at Howard University this fall to study mechanical engineering. Kecia’s younger son, Kyle, is participating in LGR’s Transition Program and intends on studying physical therapy or exercise science next fall.

Kecia’s story highlights how important it is for students to have a community of people and resources. Kecia shared that during the pandemic, some parents she knew were paralyzed – they did not know how to move forward with their students. She and her husband took it upon themselves to share resources, like Let’s Get Ready, to their community so they felt enabled to support their young people. Kecia shared some advice with other parents and guardians supporting young people: “Just believe that they [your student] can do it and they belong in the room.”

At Let’s Get Ready, we are so grateful to work with parents like Kecia and Kevin, students like Kendall and Kyle, and partners like The Boys and Girls Club of Mt. Vernon!

Students helping students to and through college!

In 2020, 57% of college students said accessing a stable internet connection was challenging. The nightmare is over! Pell students are now eligible to receive the Emergency Broadband Benefit, which provides $50/month for internet.

Thanks to @TS_Coalition for sharing this information and graphic! ...

Many Let’s Get Ready Coaches go on to careers in public service - often as a result of their experience as a near-peer mentor in our program. So we’re excited to share the news that there are big changes coming to the Public Service Loan Forgiveness Program (PSFL)!

New changes include:
Extended eligible loan type
More flexibility towards qualifying payments
Ability to apple past payments towards your forgiveness

As an organization that believes in education equity and access for all we’d like to take a moment on Indigenous People’s Day to highlight the educational inequity that Indigenous students face. There are more than 22,000 students enrolled in tribal colleges and universities (TCUs) across the country.

According to the American Indian College Fund, a college success organization run by and for indigenous populations, “the COVID crisis has changed our world in ways we could never have predicted. One outcome has been the difficulty colleges have had in retaining current students and, even more distressing, enrolling new freshman students. The long-term financial impacts of COVID, the lack of available technology, the challenges of online teaching and learning, and the continued stressors of caring and providing for multigenerational families have resulted in even lower college enrollment of Native students when they do not receive adequate support. When they receive the additional support they need, Native students have defied trends and are returning to school in record numbers. Education is the pathway to changing the current realities and injustices experienced in Native communities and will create the diverse workforce needed, especially strengthening healthcare, education and technology.”

To learn more about how you can support indigenous college students we encourage you to check out the American Indian College Fund (@instacollegefund).

Did you miss it?! On Tuesday a great group of students, alumni, partners, and supporters gathered to hear about LGR’s exciting plan to double the number of students we serve by 2025.

If you weren’t able to join us but are interested in viewing the presentation you can check out the recording at the link in our bio! ...

A reminder for students that your FAFSA form must be completed EVERY YEAR to remain eligible for financial aid. The federal deadline to submit for next school year is June 30, 2022, but the earlier you apply the more funding is available.

Make sure to check your school’s deadlines and get your application in early! Contact your LGR coach if you have questions.

Have you heard?! LGR is growing, and to reach our goals we need some awesome new team members!