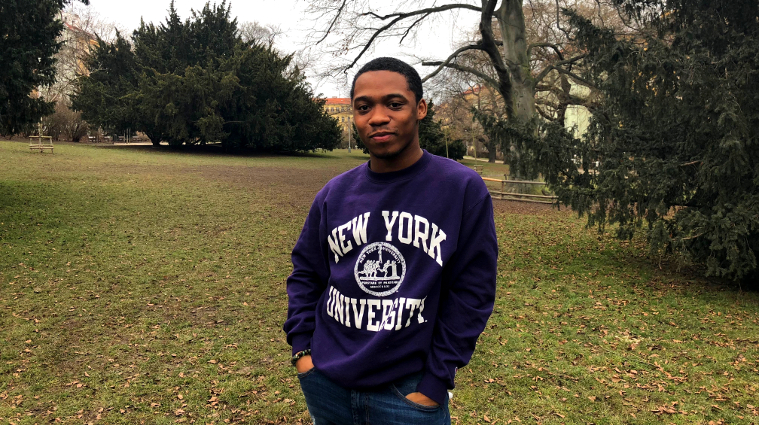 At the age of five, Divine Williams already had his college picked out. “My mother and father would take me to the Waverly Diner on 6th Avenue in Manhattan,” he recalls. “Afterwards, we would go to Washington Square Park, where I became infatuated with the talent of NYU students.” He remembers seeing the students recording a performance, complete with singing and acrobatic choreography. “I told my mom that I wanted to be like them and one day go to NYU.”

Growing up in Brooklyn, Divine pursued his path to New York University with laser-like focus. But when he reached his junior year in high school, the obstacles standing between him and his goal became apparent. As the SAT loomed, severe test anxiety took hold. “I would worry so much that I would overthink and then start to blank,” he says, “I was scared about being able to compete with students that had more preparation for college than I did.”

Through his high school guidance counselor, Divine learned about a way to level the playing field. He enrolled at the Let’s Get Ready’s College Access Program at the New York City College of Technology (CityTech) where he received free SAT prep, college selection and admissions counseling, and campus visits, among other services. The program is conducted and organized by college student mentors, or Coaches, whose recent experience with the admissions process makes them well-equipped to advise their peers.

The Coaches at CityTech went to work, not only instructing Divine and his peers on the SAT, but also helping them realize that their academic goals were within reach. “My critical reading and writing coach really helped me with vocabulary, as well as having confidence in my ability,” says Divine. “She taught me that I was not inadequate, and that with more preparation I had potential to do well.”

When it came time to take the SAT, Divine’s nerves hadn’t fully subsided—“I would literally gnaw at my nails and shake my leg throughout the entire exam.” But his preparation paid off,  and in the end he scored in the 97th percentile.

While refining his test-taking skills, Divine also looked for other ways to leverage his entry into NYU. Through his Coaches at Let’s Get Ready, he learned about the Science and Technology Entry Program (STEP) at the NYU School of Medicine where he enrolled in an internship.

His STEP internship and test score, combined with his stellar academic record and extracurriculars—including the Running Club, Swimming Club, heading the School Leadership Team —made Divine a formidable candidate for NYU admissions. Sure enough, he was accepted.

“When I got my acceptance letter from NYU, I was really happy. I ran across my entire school yelling that I got in,” says Divine. “It felt great. At that point, I had been accepted into at least 15 other colleges. But NYU was my dream school.”

For ambitious students like Divine, attending a well-matched school also comes with significant financial responsibilities, a challenge that he met proactively by working with the Coaches in Let’s Get Ready’s College Success program. “Prior to Let’s Get Ready, I had no idea what the difference between a subsidized and unsubsidized loan was,” he remembers.

Transition Coaches kept in touch with Divine remotely, informing him of important financial aid deadlines and matriculation tasks. “They reminded me about FAFSA (Free Application for Federal Student Aid) at the perfect time,” he says of the text notifications sent by Coaches. “They also sent positive messages that encouraged us during exam season. They really make you feel like you have someone in your corner.”

Coaches also pointed Divine in the direction of Higher Education Opportunity Program (HEOP) and New Opportunities at Hofstra (NOAH), scholarship programs that he, in turn, passed along to his high school guidance counselors so that others could benefit from them.

Now a sophomore at NYU majoring in media, culture, and communications, Divine has the rare blessing of embodying his childhood aspirations. He is considering a future in television production, as well as the possibility of staying in academia to teach Black media studies. His charisma, tenacity, and natural storytelling abilities will serve him well no matter what path he chooses. As he continues to amass achievements and unlock his potential, his story serves as a reminder of how the right amount of strategic guidance and encouragement can help motivated students surpass their dreams.