Let’s Get Ready’s 12th Annual Gala on April 23, 2018, held at Pier Sixty in New York City, highlighted students who are getting into and through college with the organization’s support, as well as dynamic honorees from the world of media and sports who are first-generation-to-college students themselves. The event raised over $950,000 to support the nonprofit’s mission to help students from historically underrepresented backgrounds get into and graduate from well-matched schools.

Lynda Baquero, WNBC New York City correspondent and Let’s Get Ready Board member, emceed the event, which opened with Board Chair Gary Matthews. “We’re helping young people get into college, stay in college and eventually graduate,” Matthews told the audience. “What’s equally remarkable is that we’re doing this at a cost that is one of the lowest in the country of any program like this.” The full range of Let’s Get Ready’s services, starting from junior year of high school up through college graduation, costs just $1,000 per student.

Following Matthews, Let’s Get Ready’s CEO Kathrine Mott took the podium to provide some key background on the organization’s twenty years serving more than 33,000students. She reiterated that students are not screened out, and that the nonprofit serves small as well as urban communities. 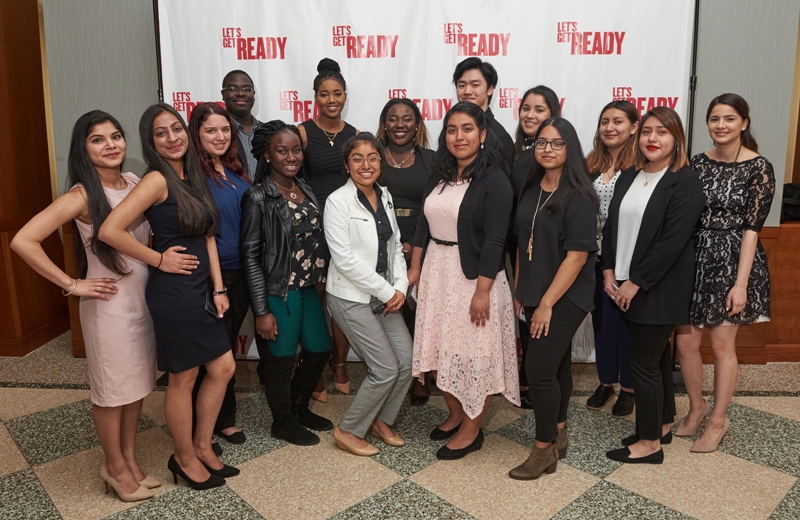 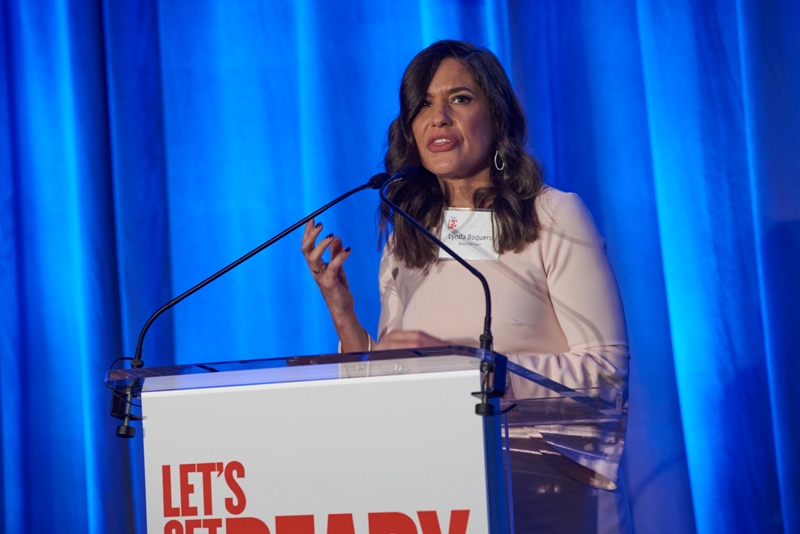 “We know that students are more successful when they can see themselves in their mentors,” said Mott. “Our program is a lot more than academic prep or college guidance. Our near-peers help our students self-advocate, to find their voices, and to build a community. And we know it works–this year, 91% of the students who participated in high school enrolled in college, which is almost double the national average for students from similar backgrounds. And 92% of of our students in college continued through their second year, significantly higher than peers.”

Mott then introduced Let’s Get Ready alumni Andrea Magaña and Yessenia Lopez, currently seniors at Lehman College (City University of New York). As high school students they received free SAT prep and mentoring through Let’s Get Ready. When they signed up to serve as Coaches at Let’s Get Ready’s New Rochelle site, they formed a bond around a passion for mentoring their peers. They will be graduating from Lehman with honors in May before joining Teach For America this summer.

“As you may know, teenagers aren’t always super honest with adults,” said Magaña about the benefits of the near-peer model, “but having someone who has been in your situation just two or three years before gives you a sense of familiarity and comfort other teaching styles don’t.” 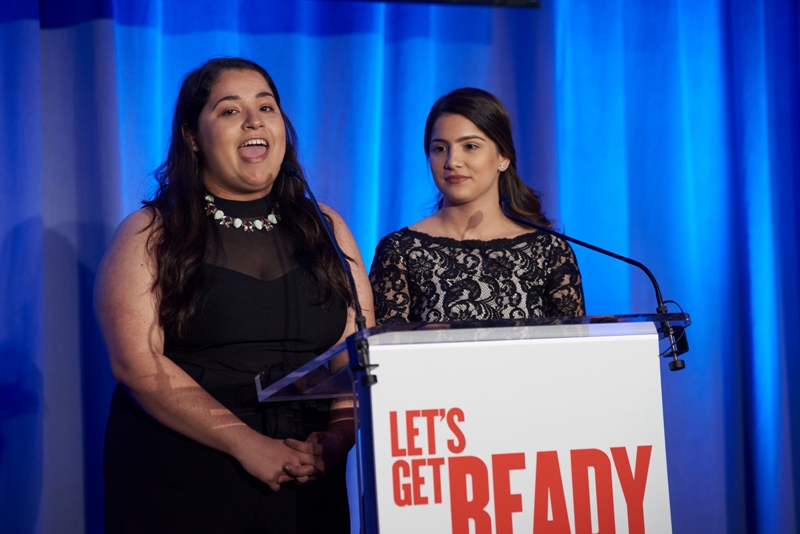 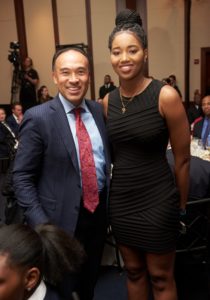 “Having been on both sides of this model has given us insight as to how beneficial and rewarding it is,” added Lopez. “Let’s Get Ready is more than academic prep because everyone is truly invested in each student. We understand that to excel, students in college need a support system to guide and help them.”

The two concluded their speech by introducing a new video feature produced by Ogilvy & Mather about Mariama Barry, who has been working with Let’s Get Ready since high school, and is now a junior at Georgetown University. The video tells the story of how the deportation of Barry’s father put her family at a crossroads where, as her mother Fatoumata puts it, “We had two choices: let everything go, or fight. Mariama showed me that we needed to fight.”

Barry decided to excel in academics for her parents, and Let’s Get Ready was there to support her. “I went every night, improved my mathematics skills, my writing skills, my language skills,” she says in the video. “My SAT score jumped about 200 points after Let’s Get Ready, which made me feel that I could apply to Georgetown. Why not? Shoot for the stars!”

Barry took the stage after the video, and spoke in more detail about how Let’s Get Ready helped her make a smooth transition from high school to campus life. “Let me tell you, it’s nothing like it is on TV,” she said. “My Transition Coaches made sure that I was keeping track of my financial aid and accepting awards. They helped me with financial literacy, like the difference between subsidized and unsubsidized loans. They made sure that I was organized over the summer and did not forget about choosing classes in the fall. They provided me with information on where to buy textbooks, because bookstore textbooks are not cheap.” The experience motivated Barry to serve as a Transition Coach, herself last summer. “I felt that it was important to let students know what people like us do to make it in life.”

Following a live auction, David Carey, President of Hearst Magazines, delivered a keynote address in which he recalled growing up in Long Beach, California, as the son of first-generation Americans who had not attended college. In 1980, prior to a tenfold explosion in college applications, he was able to combine a part-time salary and student loans to pay what was then a much lower in-state tuition rate at UCLA. “But fast-forward to today, there’s no way I would be able to attend UCLA without the support of an organization like Let’s Get Ready,” he said. He reflected on his rise in the media industry and credits working for his college paper as a vital stepping stone.

“Going to college is the greatest economic elevator the world has ever seen, and the importance of that should not be understated,” said Carey. “But it’s important to set aside the data that college graduates make more money, because college isn’t just about money–it’s about behaviors, analysis, and training needed to tackle complexities in life and in our community. College graduates are also more likely to send their own children on to college. So the work we’re doing tonight gets paid forward for generations.”

To the delight of the many sports enthusiasts in attendance, the evening’s honoree, NBA Chief Operation Officer and Deputy Commissioner Mark Tatum, was introduced by a surprise guest: 1994 All-Star and New York Knicks legend John Starks. Starks praised Tatum as a thoughtful, insightful leader who has pushed the NBA into becoming a global league that touches every continent. 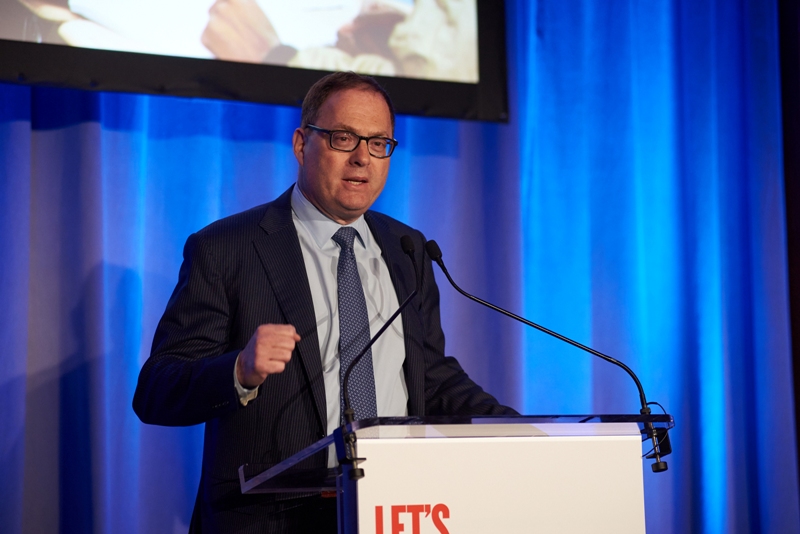 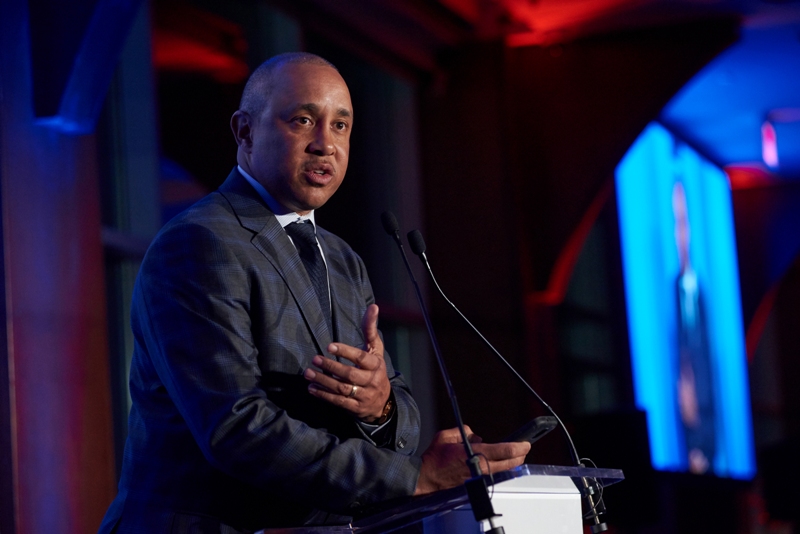 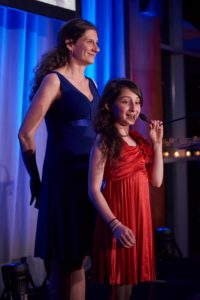 Tatum told the story of how he became the first in his family to attend college at the urging of his immigrant parents, who were in attendance at the gala. “I wish I had an organization like Let’s Get Ready to help get me prepped for the SAT and the daunting college admissions process,” he said.

Tatum then recounted his visit to the Let’s Get Ready program at the High School of Health Professions and Human Services in New York City. “They were working hard, long after the school day had finished, and their desire to better their lives was evident,” he said. “I applauded the students for taking advantage of the opportunity made available to them and told them not to be afraid to ask for help. I encouraged them to pursue their dreams and passions.”

The night’s closing remarks were made by Jeannie Lang Rosenthal, who founded Let’s Get Ready in a Church basement in Mount Vernon, NY, as a college undergrad in 1998. She urged the audience to maintain a hands-on relationship with the organization. “We encourage you to get involved with Let’s Get Ready beyond this evening and continue to engage with us,” she said. “Encourage college students you know to volunteer as Coaches and Site Directors, help us launch new partnerships, host a corporate or college tour, or make a gift and help us fund the dreams of our students.”

Let’s Get Ready is now in its 20th year of serving students since Rosenthal founded the organization and will be celebrating its thousands of alumni later this year.

As the night concluded, guests left with a deeper understanding of the challenges facing students from low-income backgrounds on their college journey, and how the near-peer mentoring offered by Let’s Get Ready is making an incalculable difference in their lives.

Let’s Get Ready would like to thank all who attended and supported the gala. The impact you have made will be felt for years to come.